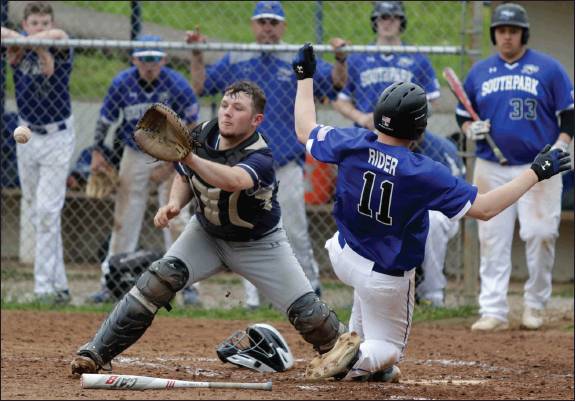 The Ringgold baseball team was back at home on Friday afternoon, looking to bounce back against South Park after a loss earlier in the week to Belle Vernon.

South Park wasted no time getting things started, plating two runs in the first inning to take an early lead. The Eagles would increase the gap to 4-0, adding a pair of runs in the third inning.

Ringgold’s bats eventually got going in the third when Koby Bubash ripped a triple into right field to score Travis Drusbasky followed by a Bobby Boyer RBI-double.

Just as the Rams looked to be making a comeback, the Eagles answered, scoring one run in both the fourth and fifth innings to reclaim the four-run lead.

Continuing to battle in the fifth inning, Koby Bubash crushed a homer over the scoreboard in right field and Bobby Boyer would later score on a throwing error to trim the lead to 6-4.

Despite trailing the entire game, the Rams battled back and had a chance to win it in the final frame. Ringgold would load the bases before South Park was able to get the final out and secure the win.

Kevin Feld got the start for the Rams, but was chased out of the game in the third.

The loss drops the Rams into a very tight section race. In order to claim at least a share of the 3-4A crown, Ringgold will need wins in their final section games against Elizabeth Forward and Uniontown.