The 2019 WPIAL Individual Track and Field Championship will be held at Slippery Rock University on Thursday, May 16, 2019.

The top 24 AAA athletes in each event have been entered into the championship meet based on times / distances achieved throughout the 2018-2019 regular season.

Ringgold’s individuals who have qualified for the championships are:

Jake Gorman qualifies for his second consecutive WPIAL Championship.  Sprints coach Gary Shawley says “Jake is finally realizing he is one of the district’s best track athletes.  His work ethic and his maturity this season have allowed him to win back-to-back Washington/Greene County Championship titles in the 400m as well as win the sprint triple crown at the Mid-Mon Track Classic (100-200-400).”  One of the turning points in Jake’s season was his success at the Baldwin Invitational (67 competing teams) where Coach Shawley believes Jake finally realized he is one of the big dogs. Coaches have high expectations for him on Thursday and next year. 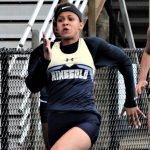 Junior Kyela Dungee qualifies for her first championship in the 200m dash.  Coach Shawley notes that “Kyela has matured into one of our most valuable female athletes on the team.  Her growth and willingness to trust myself and Coach Smalls has led to her qualifying in the 200m dash. As a coach, I am proud of her development this season.”  Her mental toughness will be the key to a good time in the championship race.

Ryan Leech also qualifies for his second consecutive championship in the discus. In 2018, Ryan placed 12th in the WPIAL and hopes to better his mark and place this year.  “Ryan has dedicated himself to the tedious process of mastering the technical/strength/speed combination of throwing the discus. He has not taken a break in the last two years; he is out there training and lifting most every day,” says throws coach Angela Gorman.  His dedication brought him a level of accomplishment (127-07) that is unmatched on this year’s Ringgold field squad. 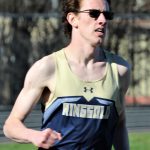 Senior Eric Obringer has had a breakout year in track since the fall where he qualified as an individual for the PIAA state meet in cross country. His focus this season has been working on his natural speed by competing in the 400m/800m in addition to being one of four on the boys 1600m relay. Eric will chase a school record Thursday in the 800m in addition to helping the boys 1600m relay try to achieve the same. 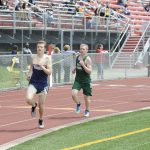 The seniors that comprise the 1600m relay (along with Jake Gorman) are the unexpected success story of the season. Montell Carlock has been a four-year member of the team but has struggled in his individual events this season. However, when it comes to the relay, his dedication to his relay brothers is unmatched. His fear of letting them down is his motivation.  Eric Obringer, mid-distance runner turned sprinter, proved he has impressive range becoming the key ingredient to the success of this relay. “We tried him out one day and were amazed with his potential. He is our lead off leg, and we can count on him setting the tone for the relay.” Jeff Soles’ dedication and motivation to be part of this relay is his strong point. “Jeff has an unconventional running style, but it seems to work for him so we allow it.  Sometimes a coach needs to let the athlete be the athlete and he is a prime example of that.” Finally, Wyatt Kaufman, is the last piece of the 1600m relay puzzle. Coach Shawley calls Wyatt “the toughest runner I have seen in my coaching career. His ability to scap and fight for every hundredth of a second in unmatched in the WPIAL. Jake Gorman is the wildcard of the bunch. “We use him when we feel we need an extra boost . It’s always nice to have a 50 second 400m runner on stand-by.” Medaling at the WPIAL finals in not out of the question. In fact, it is likely if the young men bring their best efforts.

The boys 3200m relay is split between two upperclassmen, senior Donovan Long and junior Ethan Gamble, and two underclassmen, freshman Nick Whaley and sophomore Ben Daerr. All four were apart of the varsity boys section 2018 champion cross country team. They will look to drop time and gain experience for next year in this very competitive AAA WPIAL final.