Divers from all around Western Pennsylvania traveled to South Park High School on Friday afternoon to compete in the WPIAL Diving Championships.

Ringgold’s Jonnie McDuffie and Anna Vogt were the representatives for the Rams and competed in the AA classification. Vogt competed against 16 other divers on the female side, while McDuffie faced off against 21 others in the male competition.

Vogt took WPIAL gold in dominant fashion, with a score of 436.05, the only competitor to break the 400-point threshold. Vogt’s win was her second WPIAL gold in as many years and her score was an 81.35-point improvement from her winning score a year ago (354.70) and propelled her to finish 57.80 points ahead of runner-up Alexa Gonczi of Central Valley. 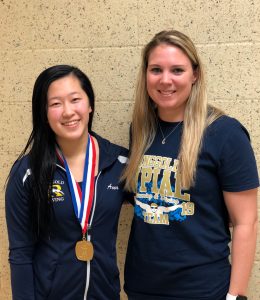 McDuffie, competing in the WPIAL championships for the first time, had more of a dramatic outing. With eight dives completed, McDuffie trailed South Park’s Cole O’Connor by 11-points and sat in seventh place. McDuffie would rally over the final three dives to move into sixth place with an overall score of 365.90! 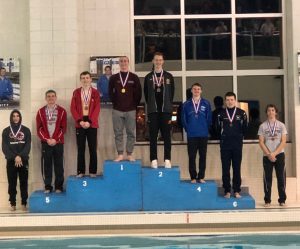 With their top six finishes, both Anna and Jonnie qualify for the PIAA Championships which are held at Bucknell University in mid-March.